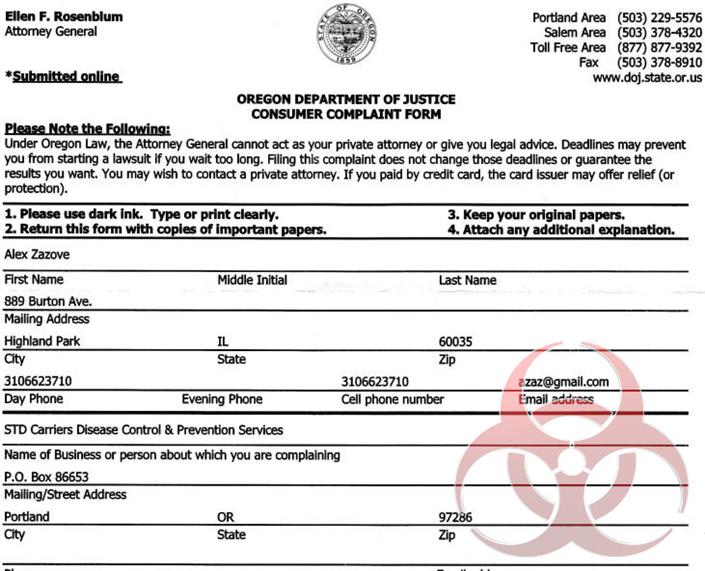 Alex Zazove filed a complaint with the Oregon Department of Justice (ODOJ) Civil Enforcement Division against a website for refusing to take down user generated content (UGC) without proof that the user violated the website's term of use. You can find the report that Zazove was complaining about by clicking on the "more info" link above the map on this page. That report was created by an anonymous user on April 28, 2009. It accused him of being bisexual and having sexually transmitted diseases (STDs). Zazove refuses to work with the website's removal program and instead chose to work with a government agency that falsely claims to protect consumers.

The body of Zazove's complaint reads as follows:

The website has a mechanism in place for removing false allegations involving STDs. It permits the party accusing the report's author of lying to submit clean test results via their medical provider. That mechanism has existed since 2008, but despite being listed on the site for over a decade Zazove seems to think that complaining to the government is an easier way to get the report removed than just getting tested for genital herpes. Often people who continue to deny having the condition for so long rather than get a simple blood test turn out to be people that actually have the disease, but are trying to get the report removed anyway. Usually they will attempt to exploit privacy laws to get around the simple fact that they cannot test negative. Their argument will be that the author of the report provided no proof that they have the disease and that such proof could never be legally obtained due to HIPAA. The problem with that position is that often people find out people have STDs from other sources such as being infected themselves or word of mouth. In such cases the honor system is the only system capable of allowing such people to warn others. It is unfortunate that privacy laws like HIPAA prevent the government from being able to publish a national STD registry based on real medical records, so in its stead we provide the best possible alternative.

Zazove's claim that submitting to testing "is also is violative of my private health information" is false. When submitting to testing an individual voluntarily waives doctor/patient confidentiality by giving their doctor permission to send copies of their test results to our post office box. They can also waive doctor/patient privilege by creating a share once link via MyChart which they send to the website. When an individual voluntarily waives doctor/patient confidentiality then the information is no longer private. Zazove's argument is common. People will claim that the website has no right to inquire as to their STD status because proof of that status only exists in confidential documents. That argument fails to account for the simple fact that those documents are only confidential as long as the patient keeps them that way. When this is pointed out they will often accuse the website of trying to blackmail them for confidential documents. They will equate giving them the option to submit proof to a form of theft similar to extortion as if a voluntary act done to mitigate a negative consequence is not voluntary. Perhaps they would have a point if we threatened to do something to them in the future if they did not turn over documents, but we don't do that. We simply do nothing otherwise. They act as if they have no choice, but the truth is they do have a choice. That choice has benefits and drawbacks just like other choices. Just because you don't like the drawbacks does not mean you don't have a choice.

We have a long history with the ODOJ dating back over a decade when Alicia Suarez first sent us proof of someone snitching to her agency. At times we tried to work with her when we thought she might be able to provide evidence that a report was in violation of the terms of use (https://copblaster.com/blast/3253/alicia-garza-suarez-would-not-help-confirm-age-of-alleged-minor), but she and her co-worker Geoff Darling seemed less interested in working with us to help people and more interested in finding ways around the First Amendment . That period of time in which the report was not online that Zazove refers to involved the FBI persecuting the founder of the website for sending a death threat to a deranged stalker that had swatted a family member of his (https://copblaster.com/blast/3248/ninth-circuits-censorship-efforts-only-paid-off-temporarily). Rather than recognizing the fact that he was the real victim, the feds chose to throw the book at him over a single isolated threatening email. They even tried to build a case against him based on his business model using complaints filed with Suarez's office as evidence, but eventually had to drop it. Despite never getting a conviction based on the business itself, the ODOJ claimed partial credit for the threat conviction. After that we revoked their contact privileges and will not respond to complaints from their office under any circumstances other than posting what they mail us online. We can do that because our website is not hosted in Oregon, so they have zero authority over it. If they ever try to "have this entity" remove anything we will just say no unless their request contains proof that the content in question should not be on the website. Getting a judge to back their efforts would not result in a different outcome.

The ODOJ claims to protect consumers while at the same time disclosing all of their contact information to whoever they complain about. We pointed this out long ago when we described their complaint form as an open relay for giving us your information (https://copblaster.com/blast/3256/odoj-policy-of-sending-subject-of-complaints-all-info-is-an-oxymoron). We don't think the form on the ODOJ website gives people like Mr. Zazove adequate warning that their personal contact information will be disclosed in this manner, so we are willing to remove Zazove's contact information if the ODOJ does certain things. They must add a clear warning that any information provided will be forwarded to the subject of the complaint, stop requiring that people submit their mailing address and phone number, and publicly credit us with helping them make the change. That public credit must include a direct link to our website published in a press release on the ODOJ website. If they do those things we will remove the mapped address on this page as well as Mr. Zazove's email address and phone number (azaz[at]gmail.com, 3106623710), and we will do the same with those of others obtained directly from their office.

We think that our offer has the best interests of society at heart. What if we were gangsters hell bent on shutting up anyone that runs their mouths about us by any means necessary? If that were the case Mr. Zazove would be in big trouble. The ODOJ sends copies of complainant data to anyone regardless of who they are. We know a lot of people that would not bother to respond to someone like Zazove peacefully. They would simply track him down and shut him up. We think it is only a matter of time until someone like Zazove gets hit because ODOJ forwards their complaint to those types of people. #alexzazove #odoj #aliciasuarez #consumerprotection
Published at Sun, 30 May 2021 16:30:23 GMT

Ghost aka Saturn raped yo mom