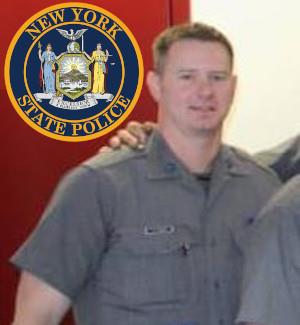 New York State Police Trooper Christopher Baldner killed a little girl on December 22nd of last year by ramming the SUV she was riding in at high speeds until the driver lost control and hit a guardrail causing it to flip over. 11 year old Monica Goods of Brooklyn was ejected from the vehicle and died at the scene. The New York State Police issued a press release blaming Monica' father Tristan Goods for her death. Trooper Baldner remains gainfully employed without consequences.

The incident began when Mr. Goods was pulled over for allegedly speeding. Exactly what happened after that remains a mystery because the New York State Police have not released any video footage of the incident. Usually police departments are quick to release footage if it supports their version of events, especially in cases involving white officers and victims of color. Unfortunately, there is no body camera footage because the New York State Police did not start wearing body cameras until April of this year (https://www.governor.ny.gov/news/governor-cuomo-announces-first-deployment-body-worn-cameras-new-york-state-police). A 2019 survey by the Associated Press revealed that the New York State Police were the largest law enforcement agency in America that did not equip its officers with body or dashboard cameras (https://apnews.com/article/f81bb08fa39448d3a94812035fbcc052). We are not sure when or if they ever started using dashboard cameras, but if the body camera legislation is any indication it seems they figured just adding body cameras would be both better and good enough.

Due to a lack of video evidence the attorney representing the Goods family must rely on forensic evidence to prove that Trooper Baldner broke the law when he unnecessarily killed Monica (see video below). We believe that he will likely be able to prove that even though Mr. Goods illegally fled the scene that there was no need to ram him into a guardrail. There certainly was no compelling reason to run him off the road that justified risking the lives of two children (Monica's 12 year old sister was also in the car). Trooper Baldner got close enough to the driver's side window to yell at Mr. Goods and fill the car with pepper spray, so he should have been close enough to see that there were children in the vehicle. Instead of simply following the father hoping he would come to his senses, Trooper Baldner ran him off the road. That is absolutely unacceptable.

In our opinion Mr. Goods had every right to do all he could to get his kids as far away from Baldner as possible. As a person of color it is reasonable for him to fear that he will be subjected to sudden and unjustified use of deadly force whenever he sees a police officer. Does that mean that every person of color has the rights to put their pedal to the metal every time they see flashing lights in their rearview mirror? You're damn right it does. Despite that Mr. Goods pulled over and gave Baldner the opportunity to assault his family. That was a bad move. Not only was his family pepper sprayed, but that attack likely made driving away far more difficult for him. We would not be surprised if Goods would have handled his ride just fine without pepper spray in his eyes.

According to public records, Christopher G. Baldner is a 43 year old resident of Cornwallville, New York last known to reside at 757 Stone Bridge Road. We normally censor home addresses of police officers, but we make exceptions in extreme cases when we think making that information publicly available cold be helpful to protest organizers or improves public safety. We think both applies to this case since people in that area might want to know that the cop living there is liable to run them off the road with their kids in the car.

We would like to thank Anti-Fascist Abolitionist AWK for bringing this case to our attention on Twitter (https://twitter.com/AWKWORDrap). #christopherbaldner #monicagoods #murder #pepperspray
Published at Sun, 20 Jun 2021 23:44:33 GMT