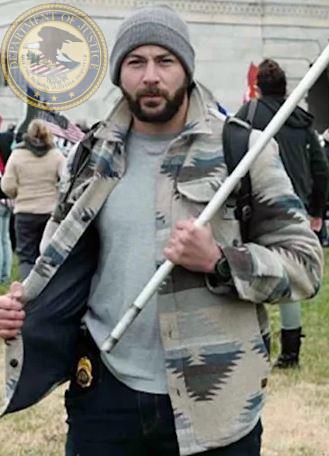 A former Drug Enforcement Administration (DEA) agent was arrested today for trespassing at the United States Capitol with a firearm on January 6th. Mark Sami Ibrahim now faces federal charges of entering or remaining in a restricted building or grounds, making a false statement, stepping or climbing on something illegally, and possessing a firearm on Capitol grounds.

You can read the detailed complaint by clicking on the PDF icon above the map on this page. The document does not allege that Ibrahim actually entered the Capitol Building or that he engaged in any violent acts. He did however flash his DEA badge and service weapon in photos taken outside on Capitol grounds. Ibrahim was just a probationary agent and had already given the DEA notice of his intent to resign. One would hope that he saw the light and simply didn't want to treat his fellow man the way that police officers treat people. We have learned over the years that many people start working in law enforcement thinking they have what it takes, but eventually succumb to their own humanity and quit. We are not sure if that was the case with Ibrahim, but until we know otherwise we will give him the benefit of the doubt.

We also think it is kind of lame that someone would be charged with a crime just for carrying a gun outside the Capitol Building. He does after all have a 2nd Amendment right to bear arms and the Capitol grounds are a public place. Its not like he went inside with zip ties and tried to kidnap Mike Pence or anything. It situations like that it is probably best to reward those that simply remained outside and didn't hurt anyone.

On the other hand he did lie to federal investigators when asked if he were on the Capitol grounds two months later. That is why he is charged with lying to federal officers. That could make his presence at the Capitol appear less benign because if he had nothing to hide why lie? Surely he knew from his experience in law enforcement that someone would likely notice a man flashing a federal law enforcement badge while holding a "liberty or die" flag outside the building the same day people stormed it. He likely knew that it wouldn't take long for his fellow officers identify his photo using facial recognition software. Perhaps a better approach would have been to admit being on Capitol grounds with his gun while also arguing that he just went there to exercise his First Amendment rights and was not involved in the mayhem phase of the day. #marksamiibrahim #dea #capitolhill #gunrights
Published at Tue, 20 Jul 2021 15:49:10 GMT