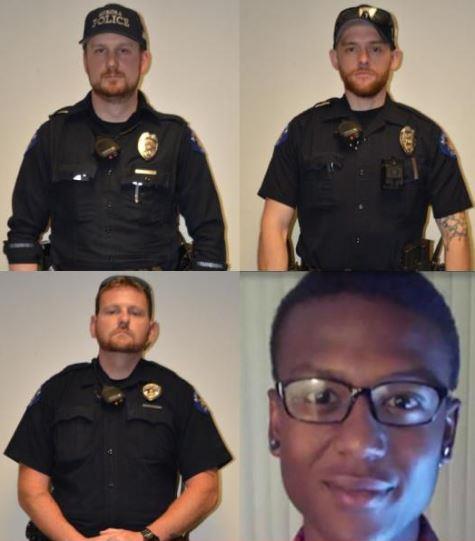 Aurora Police officers Randy Roedema, Nathan Woodyard, and Jason Rosenblatt were indicted today along with paramedics Jeremy Cooper and Peter Cichuniec on charges of manslaughter and negligent homicide in the 2019 death of Elijah McClain. They also face a variety of less serious assault charges.

We profiled most of them last year and are incorporating that article by reference in support of these charges (https://copblaster.com/blast/25811/family-wants-nathan-woodyard-jason-rosenblatt-randy-roedema-charged). We said then and we say today that "A competent paramedic would not inject a patient with drugs without checking for potential side effects including conflicts with current medications and allergies before administering the shot unless the life of the patient depended on immediate treatment." That paramedic was Peter Cichuniec who at the request of officers Woodyard, Rosenblatt, and Roedema gave McClain the ketamine that ultimately killed him. We primarily blame Cichuniec for McClain's death because its one thing for frustrated officers to ask paramedics if there is anything they can give someone to calm them down, but its another for a trained medical professional to grant that request right away without any diligence on behalf of the patient.

Cichuniec never would have had to consider giving McClain anything in the first place had he not been wrongfully stopped and assaulted by officers on his way home from the store. McClain had purchased groceries while wearing a ski mask, but didn't break any laws. In the officers' defense anyone looks suspicious entering a store wearing a ski mask no matter what color they are, but just wearing a ski mask even if in a bank is not a crime. Officers had no cause to stop let alone use force on McClain. McClain was understandably upset and simply asked that he be left alone. Then officers took hold of him and he allegedly tried to grab one of their guns, but the only evidence supporting that allegation is an officer saying "he just grabbed your gun dude" while the body camera is moving back and forth so fast everything is a blur. Officers often yell out baseless accusations like that to justify using force knowing full well that the body camera footage won't be able to prove or is disprove them.

Before the ambulance even arrived officers could be heard saying that paramedics would be giving McClain ketamine to calm him down. That indicates that the police and not paramedics were calling the shots as far as medical treatment was concerned. The indictment says that the cause of death was ketamine overdose. Some might argue that the paramedics alone should be charged with manslaughter because they administered the lethal shot. We think they all share the blame because the officers were directing paramedics to violate their Hippocratic oaths.

Jason Rosenblatt was fired last year after he and three other officers were caught on camera mocking McClain's death (https://copblaster.com/blast/25826/jason-rosenblatt-erica-marrero-jaron-jones-and-kyle-dittrich-fired). They went to a memorial site laughing and smiling as they posed for photos while reenacting McClain's death. The other defendants have been suspended without pay. #nathanwoodyard #jasonrosenblatt #randyroedema #elijahmcclain
Published at Wed, 01 Sep 2021 16:48:28 GMT